Took me long enough to update the blog, sorry about that.
I have been playing loads of games (and buying loads of miniatures as well...), and I even entered the 2012 painting pledge (to paint at least 5p worth of WM/H mini's each month for the whole year), and also sold off my Lizardmen, Chaos (not the Sons of Malice though), Lizardmen and Necron-armies.
So I guess one could say I've really dug myself down in the PP universe.
I have discovered the awesome might of eKreoss T4-list at 35p (I have yet to lose a game with it), in fact it seems so good that I won't use it again for a while (or until someone asks me to play it) and have set my eyes on the Harbringer. 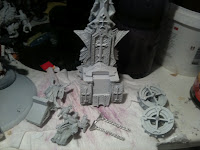 My Warcaster cadre at the moments stands at Harbringer, pKreoss, eKreoss, pSeverius and Reznik.
As soon as I get my Vessel of Judgement together (at the moment it sits there, staring at me, primed and ready to get painted and assembled...) I will try the Holy Zombie Reznik-army. :)
I would also like to try out his NQ theme list "Knocking on Heavens Door" but it requires me to buy a whole lot of Steelhead Mercs so it will have to wait a while.

So for my next caster I went with something less "point and click"-like and I have now set my eyes on the Testament.

Not only is his model made of awesome, he has cool fluff and seems to bring a few funky spells and abilites to the table.
Urcaen's Gate, Essence of Dust, Reclaim and the Omegus are all very neat and interesting (no moar sowlz fer yoo Kricks!), plus I can see uses for all of his spells that might drive a few opponents crazy.
I might pick him up early next week to field him on thursday (if I can get the time for it) together with Deliverers (they can also find a place in a pKreoss pop'n'drop-list).

Guessing I'm up against Circle (as usual...) and Cryx, it might be some interesting match-ups! I will be back with the results!
Upplagd av Grasp My World kl. 06:26