Just "finished" mine and my friends' gaming table/s.
We bought a gaming mat off of GW and glued it to 4 pieces of chipboard.
Unfortunately the mat is only 6x4 feet and we needed 8x4, so I "made" an extra with some sand and static grass.
Unfortunately (2) the static grass and the grass on the gaming mat didn't have the same green tone, DOH, so I'll have to fix some more static grass tomorrow and fix that up.

Anyhowz, some pictures of the two pieces I'm gonna keep, showing of a few of my WM mini's as well. 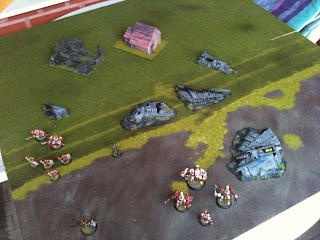 As you can see there are a few lines with lighter green, that was where I "repaired" the gaming mat pieces I glued to the second board.
Looks a little silly but I'll fix it up in no time.

So each gaming table consists of two pieces of 2x4 feet, and you can of course put all four of them together for a really large table (8x4ft) if needed.

(Terrain is mostly from the 4th edition 40kbox, the crashed lander, and a printed and glued house, and a homemade ruin.)

Had to show off my minis on the new table. :) 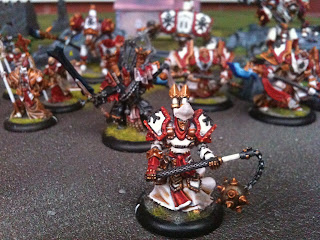 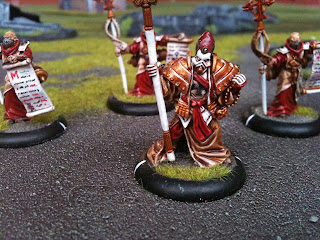 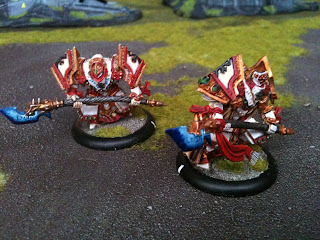 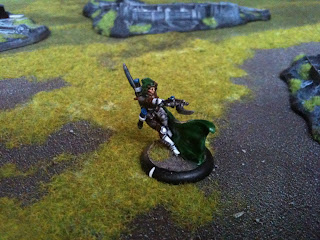 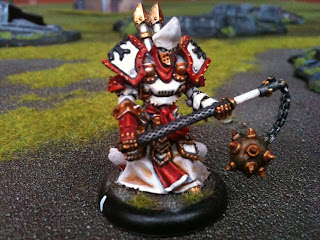 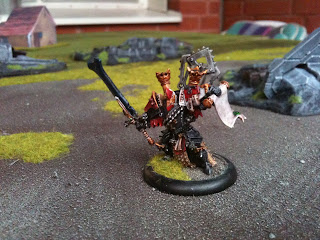 Painting Menoth pt II: How I do it

In case anyone would wonder how I do it (or I forget it myself...), I thought I might jot down a few notes about it. I use mostly GW colours and a few vallejo since I am familiar with them.

I really enjoy painting. I do. Most of my collected forces are a result of my painting nerve getting the better of me.
Although I am by no means especially good at it, I have always thought that the painting part was the best part of mini wargames.

Here are a few not-so-sexeh pictures of a few painted ones. 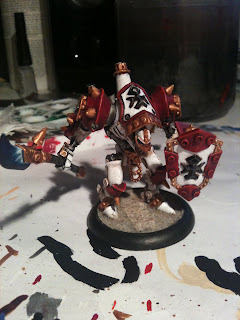 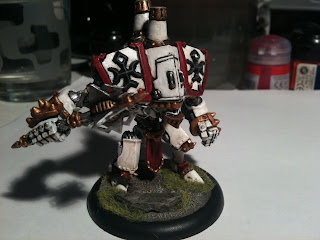 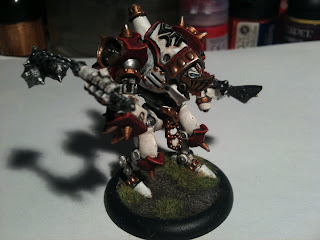 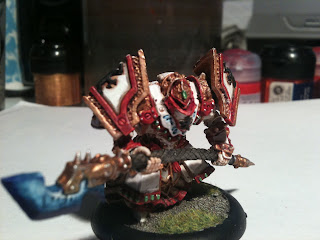 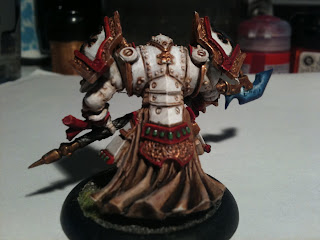 As I said, not the best painted mini's of all time, but I am satisfied and pleased with the result (painting white can be a real pain sometimes..).
Upplagd av Grasp My World kl. 10:52 Inga kommentarer:

Third is a charm! This time we decided to try and do it more by the book and more unforgiving if we forgot to do certain things (no more 40k-turns and so on), to get a more proper feel of it.

This time it felt like a proper win on my behalf (my first win was just lucky since none of us really knew what the hell we were doing).

Before we started I decided not to let him control my movement, but instead try to make him have to do the regrouping and hopefully giving me a slight advantage.
I placed my warcaster just out of reach from his Argos and "forced" his Warpwolf to take a detour around a building, making me taking on his army in pieces instead of having him smashing into my lines like a coordinated wall of bulldozers like last battle.

He used one of his Argos to try and take a potshot at my caster (I had actually forgot that he could give them pathfinder), but he couldn't really reach him (something like 0,5cm from the 0,5" melee range) and moved up with his other Argos and his warlock on the same flank, leaving his Warpwolf alone on the other.
I decided to pop my feat, knocking down everyone except for his big wolf, killing off both his Argos', he then teleported his WW to his WL to protect him but we both knew it wouldn't end up in any other way than a Menoth win.
Bravely he charged in with his WW and his warlock, and managed to get a few boxes off of my caster due to Kayas reach.
Though after a completely moronic turn I forgot about the "don't think its 40k..."-rule and moved all of my warjacks into melee without using any of them to actually trying to hit the warlock, except for the Repenter which, of course, missed with its attack.
Me being a cocky sunnuvabitch I just boosted an Immolate and threw a fireball at Kaya, wounding her but not killing her.
The next turn was a rather one sided affair though as I managed to take off the last few boxes on Kaya and still having my jacks left (though quite damaged thanks to the WW).

- His Feral Warpwolf is REALLY dangerous when he charges, since he is both fast and very powerful, almost managing to scrap my boosted Crusader in two turns of melee (although we later discovered that he had mistakenly used pathfinder on him when he charged).
- Know your reach and range, always meassure using your Casters/Locks control area before doing anything overzealous or stupid, it almost cost me my Warcaster during the first turn.
- Continually ask your opponent about his special abilities on his units, I forgot he could get pathfinder on his Argos!
- Try to keep your spells and feats in mind at all times, "if I wait another round, will I get better effect from it, or should I use it now to force him into changing his battle plan if I can get a few boxes in or even kill something?".
- As a Hordes-player, don't forget you can regenerate some damage using fury, as well as spread your Warlock damageboxes around to beasts in the vicinity.


All in all, a great game for me, a slightly less enjoyable game for my friend (I guess), it's never fun to forget about abilities and missing a vital charge by just a few millimeters.

Hopefully the next game will come in a not-so-far-away future!
Upplagd av Grasp My World kl. 09:09 Inga kommentarer:

A few days after our first battle royale we decided to have another scrap, same forces but with a little more experience inside our vests.


This time it went better for my opponent and a lot worse for me.
The first game ended with me having all of my jacks and my caster still on the table and him getting wiped of it.
Now when we faced each other again, things went a lot better for him.

He ran hard up on my left flank, forcing me to move about with my comparably slow warjacks. He locked my Crusader and Repenter in melee, disabling my Repenter fairly easily. I charged in with my Revenger and took out one of his Argos.
He charged his Warpwolf at my Crusader and almost had him down, my warcaster charged up and tried to kill his warlock, but failed with just one box left!
After a teleport of his warcaster he managed to get his big bad wolf in melee with my caster and scrapped him utterly.

Although we did quite a few mistakes this time as well (not using his teleport correctly and so on) it actually felt better, even if I lost.
We both learned how effective a proper assassination-run can be, as well as enjoyed how close I came to victory after I got my ass kicked, and then, just one teleport and a few good hits from his Warpwolf and victory was his.
Very good game and we definately felt that this was a game for us, fast paced, rewarding and punishing and a lot of fun.
Upplagd av Grasp My World kl. 08:47 Inga kommentarer:

It was actually a few weeks back, but I felt that I might as well type down anything I remember from that fight, since it was our premiere.

We decided to play with the mini's from the starting boxes of our factions, Protectorate of Menoth (pKreoss, Crusader, Repenter, Revenger) for me, and Circle Orboros (pKaya, 2 Argus, Feral Warpwolf) for my friend. So 11p it was.
We had a few misunderstandings and misconceptions since it was our first time, we both did the "40k turn mistake" and moved all of our Warjacks/Warbeasts before shooting with any of them, but decided to let bygones be bygones, at least for now, so we could catch up on the rules.

After a turn or two of mostly searching the rules for "how to do anything..." we ended up in melee, I popped my feat and managed to knockdown all of his models in one go, my Repenter cooked one of his Argus and my Revenger and Crusader killed his Warpwolf (his other Argus had died the turn before), leaving him with just his Warlock, a rather one sided fight, since he got his Argus out of his control range and did not know of my feat.
Plus we had some trouble with remembering his regeneration-rules and my continous effect: fire.
But it was an ok test, we got a feel for it and made lots of mistakes, proper noobs in other words.
Upplagd av Grasp My World kl. 03:02 Inga kommentarer:

Welcome to anyone who has found their way here, I hope to bring a few readable pieces about my wargaming experiences as well as one or two pictures of my miniatures.
So, this is my story:

I started playing the old Heroquest-game when I was very young, and so tried out both Advanced Hero Quest and Tyranid Attack before I had any real concepts of what the hell I was doing, I just loved the miniatures and the cool feeling of storytelling.
And so back in 1995/1996-something when Games Workshop made a real push for their brands here in Sweden, I got into playing Warhammer 40k since I recognized the Space Marines and Tyranids and except for a few years of neglect, never really stopped painting and collecting.

... scary prospect that I have spent more than 15 years in the service of little plastic and metal miniatures...

I started out with some Blood Angels and we used to play 40k together, me and a couple of friends, even though we didn't really have any clue about what we were doing, since the rules are written in a rather advanced kind of english (at least to us 11-12 year old swedish lads).
Eventually we figured most of it out and enjoyed getting our asses kicked by the Eldar player, good times... good times...

We then started Warhammer Fantasy Battle as well, but never really got around to it seriously, expensive mini's and lack of interest made our gaming falter and so we missed out totally on two versions of 40k and WHFB.

No biggie to me, I kept my mini's and collected a few more when I felt like painting something new.

2009, and I realise that I have a friend who plays 40k without my knowledge, BLAST!
So now I'm back again, playing 40k with my Blood Angels and WHFB with Lizardmen.
Only real trouble is, the people of his gaming group are not satisfied with either gaming system, "it's broken... unplayable...".
So they all start talking about changing to Privateer Press' systems of Warmachine and Horde, and well... being a creature with a great need for collecting and painting, I join them.

So now, I have the following armies:

WHFB:
- Lizardmen ~2000p (about half of it painted, everything assembled)
- Wood Elves ~ 750p (nothing painted, most of it assembled)

Warmachine:
- Protectorate of Menoth ~ 45-48p (freshly started, more than halfway through the painting)


Probably more stuff on the way later on, I am the father of a little boy who takes up quite a lot of time and funds. In fact he's screaming like a little monster at the moment. I'll be back later...
Upplagd av Grasp My World kl. 02:30 Inga kommentarer: